class="archive author author-bandmaster author-6 custom-background wp-embed-responsive custom-background-white custom-font-enabled elementor-default"
We’ve had a fun but busy Christmas this year and have thoroughly enjoyed helping to get everyone into the Christmas spirit!
Our jobs with the Almond Family Pub chain were well attended and received and we enjoyed some fantastic audience participation at St Mary’s Parish Church, Cheadle following another successful Victorian Christmas Market event. We joined in with the wonderful ‘Festival of Lights’ event at Beechwood Cancer Care, carolled with furry friends at Tatton Park, enjoyed a ‘Ding Dong’ at the Duke of York, Heaviley and all in all had a jolly good time throughout the festive period with our Christmas Eve carol event around the Christmas tree in Heald Green still to look forward to.
Our inaugural Christmas Concert at Whitfield House was particularly special for us and was a fantastic way for us to celebrate our first year at our new rehearsal venue and say thanks to band members and supporters for their involvement throughout 2014.
Whilst we’re thankful to all our members and supporters, there were a select few that were singled out for some ‘special’ awards on the night.
More photos from the event will be added to our gallery page as soon as possible – kind thanks go to Thomas Demol for taking time out from his busy schedule to take photographs on the night.
Merry Christmas and all the best for 2015 from all at Stockport Silver Band. 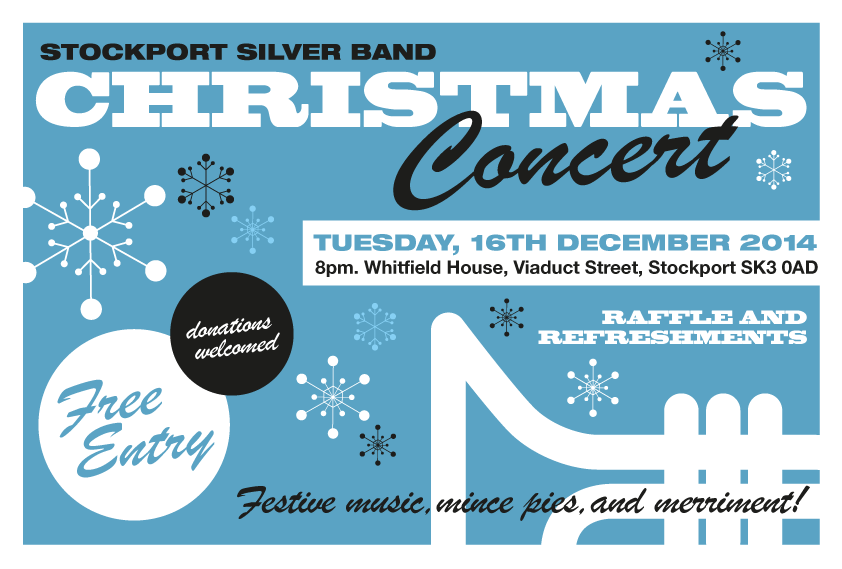 Entry is free! but donations are welcomed.  Refreshments will be available.

Why not come along support the band and enjoy the music.

For a full list of event, please see our events page