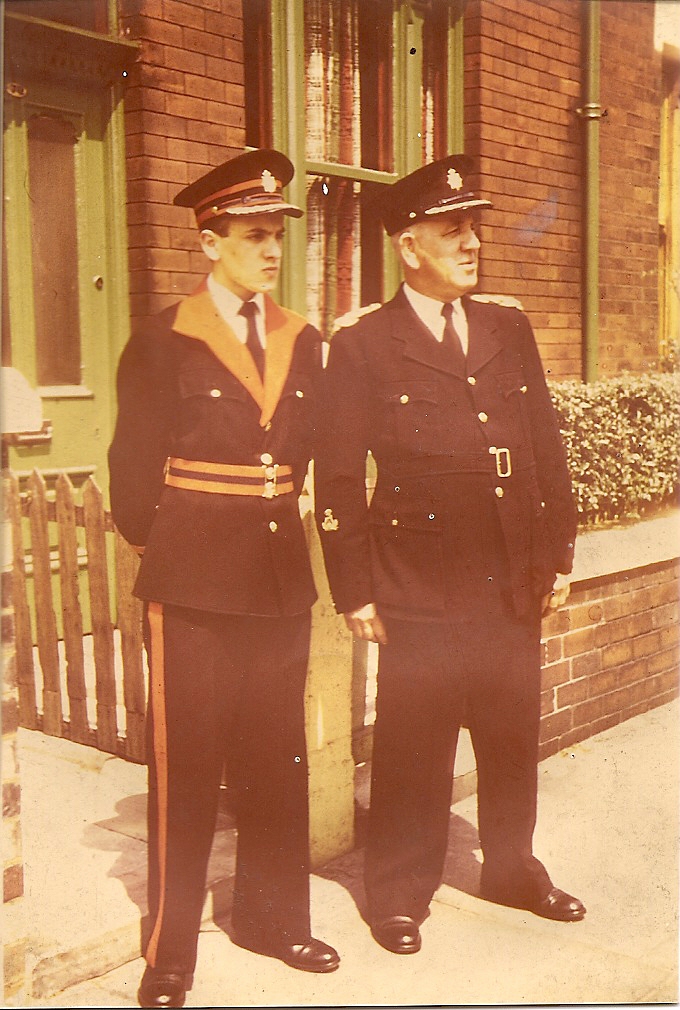 A History of Stockport Silver Band

The band has been in existence for over a hundred years.  In fact this year 1980 will be it s one hundredth and tenth.  As I have only been connected with the band since the 1920 s I cannot say how it was formed, but we have music that has the year of it s formation rubber stamped.  The band has had a varied career and many different Band rooms or practice rooms.  The first one that I knew was behind the  Brittania Inn  a pub long since gone, it was in church gate just higher up than the old church and on the opposite side.  The bandmaster in those day s was Jack Hargreaves a very good musician and also well know as a baker in Portwood.  He had a son Jack who was a very good cornet player, he also followed his father in the bakery business and had a stall in the market.  I only knew two other players of the post 1914 war band.  One named Eckersley a cornet  player who ended his days in the Reddish district.  The other was a man named Swain who either lived in Emperor Street or round the corner in Hersey Street, he was a bass player.  When the Band left the Britannia, they went for a short time to a pub under the viaducts, the  Gardeners  and from there they went to another defunct pub, the  Commercial , the landlords name I think was also Eckersley.   By then the band had another conductor, his name was Harold Bennett, and to him more than to any does the present band owe its existence.

At one time it was jokingly called Bennetts Band because his father played the bass drum, another brother the trombone and euphonium  and another was drum major.  Harolds son Jack also played cornet.  Besides being conductor Harold was the general factotum, he repaired music, was librarian, errand boy.  Whenever instruments needed to be repaired he took them to Barretts, Rhodes, Mayers & Harrison or to any place.  He had the Band for at least fifty years.  He was our rep when the N.W.A.B.B.A was formed.  When he retired from work the Band was his sole hobby and he gave up most of his spare time to the Band.  May I say here that his wife was a very understanding lady and encouraged him to do the best he could for the Band.

The  Commercial was in the armoury square since gone and had to come down to make way for the new road and roundabout at the top of King Street and Shaw Heath.  The name  Stockport Silver  came about by the joining together  Edgeley Prize  and another old Band.  The late Cheshire Yeomanry Band.  This is how it happened the Yeomanry used to practise at the  Pineapple  in Heaton Lane, they had a hut at the side, their conductor was Mr J Seddon and he had them for many years.  In fact I think he was still their Bandmaster when he died.  His death brought about a crisis for the Band because whether by accident or not they had to leave their Band room.  not safe  was the excuse given and it put them in a fix, so they came to us (Edgeley) and proposed a merger, both Bands were in a poor state member wise and committees of both Bands decided to adopt the idea and the  Stockport Silver  was registered with the N.W.A.B.B.A.  The  Yeomanry  also had a family of member ie. the Barlows.  There was the father, old Tom who I think was secretary, young Tom, bass trombone and Ted who played cornet.

When the cotton trade went west Tom went to Play with  Baxendales  a near top class Band, Baxendales got bombed out in the raids on Manchester and I don t think the Band was ever reformed.  Another player to find fame (as far as Stockport went) if not fortune was Joe Lee, he was the first I think.  He went to the  St Hilda Land  later he went to play on the liners for a while and did a season or two with Jan Berenski at Llandudno.  Joe is still around he lived up Offerton, the last time we played up there we played outside his house, as I was a member of Edgeley Band I don t know a lot about the Yeomanry although I knew Barlows very well (worked with them at the Palmer Mill) and I knew Joe Lee not very well along with another cornet player who lived not far from him named Smith also the Waltons.  Edgeley had another devoted and long serving player Alf Kelsall, he was also the Band over fifty years and gave up playing because of bad health, he too lives in Offerton.  From the  Commercial  we went to the  Hollywood Hotel  and from there to the  Adswood Hotel  we are now back at the Hollywood and would be pleased to see any old member of the Band or anyone wishing to become a member(Please note the band currently rehearse at (Kimberley Street Day Centre, Kimberley Street, Shaw Heath, Stockport, SK3 8EB).

As far as contesting goes we have not set the town alight.  For the last few years we haven t done any, until just these last twelve months.  We have had several minor prizes.  The last major prize we won was the May contest at Belle Vue, when we won our section under Mr Harold Bennett.

There was one other custom that was started by the Yeomanry Band.  The writer of  Christina Awake  the Christmas Carol is buried in St Mary s Church or the old church in the market place, and every Christmas morning the band used to play his carol over his grave.  When the war came this custom  was dropped.

No Band afterwards, it wasn’t restarted, mainly I think because the Band was in a poor state of players.  The tradition of Bands playing at Christmas has died out, although our Band tries to keep it alive by playing where we can.  One ex member of the Band is still playing with the Fairey Engineering, he has been with them more than 25 years.  His father played the tenor horn and he joined us as a boy.  I think he played with them during their recent triumphs, his name is Jack Hewitt.

The Band used to play in all the carnivals in the area, each Town used to have its own.  Also in the parks in the Town.  In the period before the war there were several Bands in the town, we are the only one left, although the G.P.O. Engineering Band has been formed in recent years.

If you can add to the History of Stockport Silver Band please contact the webmaster.

This site uses Akismet to reduce spam. Learn how your comment data is processed.